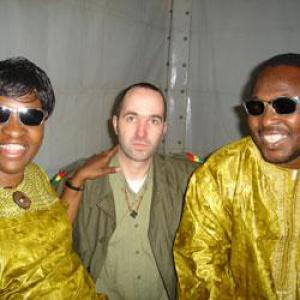 All too often, Amadou & Mariam are still simply introduced as "the blind couple from Mali", a shame really considering their musical efforts. That that opinion is not only ours is proven by their numerous collaborations with artists like Sergent Garcia, Manjul and of course Manu Chao with whom they recorded the fantastic album ‘Un Dimanche A Bamako'. We met up with the couple after yet another great concert at Festival Mundial in Tilburg.

Amadou, back in the days you started out as a musician with Les Ambassadeurs Du Motel. For people who might not have heard of it, how would you describe that band?
Amadou Bagayoko: "Les Ambassadeurs Du Motel was a big orchestra and the resident band at a nightclub called Le Motel, a place where a lot of members of government and foreign diplomats used to hang out. We played just about every style of music, from pop tunes over Afro-Cuban music to traditional Malian songs. It was a kind of variety orchestra, but if we were asked we would just as easily have played you a piece of jazz."

You're a true multi-instrumentalist, having mastered instruments like the flute and the accordion, but the instrument you really lost your heart to was the guitar. Where did your love for that instrument come from?
Amadou: "I really started playing the guitar because it was an instrument that allowed me to sing and play at the same time. Apart from that I've always been a big fan of Jimmy Hendrix, John Lee Hooker and other famous American guitar players. I love the blues and the guitar is also a distant cousin of the ngoni, a traditional Malian instrument."

All too often, you're still announced on stage as "the blind couple from Mali". Don't you find that a little embarrassing, because it doesn't really say anything about your musical accomplishments?
Amadou: "(laughs) True, it doesn't really say anything about our music, but I have to admit, though, that at the beginning of our career it kind of set us apart from other Malian artists. These days, I don't really see the necessity anymore, and luckily we're not being announced in that way too often anymore. I really hope one day just Amadou & Mariam will suffice."

You got to know each other at the Centre des Jeunes Aveugles ("Centre for the Young Blind", red.) in Bamako and, strangely enough, you both ended up there after having become blinded as a consequence of diseases that are easily treatable in the West (Amadou was left blind after leaving cataract untreated and Mariam suffered complications after measles, red.). Has the health service in Mali improved since then?
Amadou: "Yes, it has already changed a lot. Technology has advanced significantly and the government is now making a real effort trying to prevent people being left blind from cataract or measles. Apart from that, the treatment and education of the blind has also progressed a lot. I really believe things have changed radically since our days."

Have you remained in close contact with the center?
Amadou: "Oh yes! Every year we organize the Paris-Bamako festival in collaboration with them, the proceeds of which are intended to better the institute."

In the early days of your career as a duo, you kind of conquered the African market by selling cassette tapes. Is that market segment still as important in today's Africa as it was in your days?
Amadou: "(laughs) Yes actually! We still use a lot of cassettes in Africa. Of course in our day things like the CD or mp3 didn't exist yet, but today still cassette tapes are very cheap and almost anyone can afford them."

The album that changed your careers forever is of course 'Un Dimanche à Bamako'. Did you already expect it to hit big when you were recording it with Manu Chao?
Amadou: "Absolutely! But we really experienced that album. Because of 'Un Dimanche à Bamako' we got the chance to travel all over the world. It's an album that has brought us an enormous amount of joy and satisfaction."

Did you already hear of Manu Chao before you decided to collaborate with him?
Mariam Doumbia: "Well, we knew his music a little, but it was really he who came to see us. He had heard our voices and absolutely wanted to work with us."

Did this more crossover album change your take on the way you record your music?
Mariam: "'Un Dimanche à Bamako' is still an Amadou & Mariam album. We were already pretty successful before it was released, so I guess we considered it to be a natural evolution in our music."

Do you think your blindness changes the way you perceive music compared to how a seeing person would?
Mariam: "I think so, yes. It has to do with the degree of focus you put into it."
Amadou: "Yes, that's it. Blind people are better at focusing on sound for a longer time, shutting out all other senses."