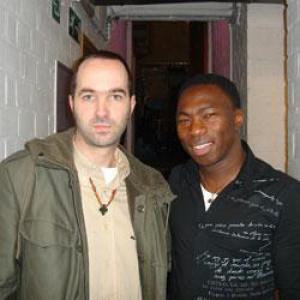 Talking to Aly Keita means talking about the balafon (West-African type of wooden xylophone, red.). The balafons you use are different from most and I believe you make all of your instruments yourself, no?
Aly Keita: "That's correct. The balafon is a traditional instrument used in several West-African countries. I play and construct my own instruments, but you also have musicians who buy their instruments, or manufacturers who build balafons but don't play them. I was already building them before I learnt to play. In our family the balafon has been a constant for centuries already."

What does one need to build a decent balafon?
Aly Keita: "The balafon is constructed from three types of materials. The wooden keys are made of rosewood and the resonance boxes underneath are calabashes; a sort of wild fruit similar to melons that grows in different shapes and sizes. Little holes are pierced in the bottom of the calabashes and these are filled with cobwebs. These days they are getting harder and harder to find, but it's well worth doing because it gives the calabashes a more metallic sounding vibration and increases the volume as well."

A few years ago you constructed the largest balafon ever built for a festival in France.
Aly Keita: "Yeah, that was a project for a festival called Ingénieuse Afrique in Tarascon sur Ariège. That balafon had a length of three meters and a diatonic range of four octaves. It was an enormous instrument, but it was actually playable, so it wasn't just a demonstration piece. Until today it's the biggest balafon ever constructed."

Did you play it by yourself?
Aly Keita: "We constructed it in Africa, took it apart again to ship it to Europe and then assembled it again in France where my brother and I played it at the final concert of the festival. You could also play it at three, though."

You're music is very much influenced by jazz. What attracted you to that type of music?
Aly Keita: "Where I come from we have a saying that goes: "Never forget where you're from!" I'm a Keita, but not all the Keita are griots; Salif Keita, for example, is from a family of noblemen. As I already said earlier, the balafon has been in my family for centuries. My father still played it the traditional way and he taught us how to play as well. I was born in Ivory Coast, but he took me to his birthplace, a small village in Mali, to show me the traditional ways. On my return to Abidjan, I was discovered by a jazz pianist (George Makinto, red.) who saw me playing on the side of the road. He introduced me to the piano and I immediately noticed several similarities with the balafon. He really taught me a lot back then and I'm still very grateful for it today."

Are there differences between giving a concert in Africa or Europe?
Aly Keita: "There are differences, yes. In Africa the people immediately start dancing. All African music, even traditional ritual music, is made to dance. Seated concerts, where people come to observe the virtuosity of the artist, don't exist in Africa. When I was still playing in Abidjan, my concerts were often advertised as balafon concerts and that didn't gather much interest because the people were saying: "Not another balafon player! We can already see that everywhere." It's hard for me to put into words the level I've taken this instrument to, people just have to come and see it for themselves!"

When you perform a piece on stage, how much improvisation is involved?
Aly Keita: "Improvisation comes from the inspiration, energy and emotion coming from the audience, so it depends on the circumstances. When I play the balafon I forget everything around me and I try to give the audience what it deserves."

The title of your debut album, 'Akwaba Iniséné', means "welcome" in two different languages.
Aly Keita: "Yes, "akwaba" is the word for "welcome" in Bete, a very widespread language in Ivory Coast, but since I also have Malian roots, I added "iniséné". I've been doing stage shows for over fifteen years now, but I never recorded an album as a solo artist yet, so with that title I wanted to welcome my album into the world as well."