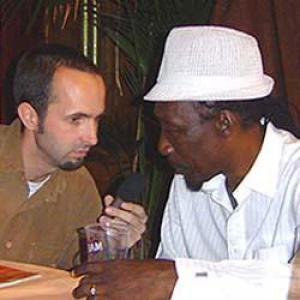 In the evolution from ska to reggae there was an all too brief period where the island of Jamaica was ruled by a type of music called rocksteady. Godfather of this new musical direction was Alton Ellis, the island's undisputed number one recording artist until Bob Marley arrived on the scene. We had an interesting conversation with a living legend in Jamaican musical history.

Alton, welcome in Belgium. I hope you liked this festival a bit? Hove Live is one of our smallest and nicest festivals.
Alton Ellis: "Yes man, it's very nice! The vibes here are much much bigger than the audience. Everybody is happy, enjoying themselves peacefully and lovingly and that's the most important."

You being one of the first recording artists in Jamaica, how do we have to imagine those early days in the musical history of the island? Today the country has one of the biggest and most productive music industries in the world, but how were things like in those days?
Alton Ellis: "It was difficult. In those days there were only two studios, one of which was really a radio station. That was all there was, so it was also very difficult to get started. When Clement Dodd started doing recordings at Federal Studio, which is now owned by the Bob Marley estate, a set of Studio 1 artists began recording there and I was in that first lot."

Sir Coxsone sadly passed away. How do you remember him, being a Studio 1 veteran yourself?
Alton Ellis: "He reminds me a lot of Moses. He was doing so much good things but at the end of his days he blasphemed against God. Coxsone did exactly the same thing because he did not want to pay anyone anything. That was the sin that he committed. Apart from that he was a great person. He was a musician that could not play any instrument, a musician that could not sing a note, but a real musician none the less and an inspiration. He inspired a lot of people. He could make you do things that you didn't even know you had in you! The sin that he committed was getting so carried away with the money aspect of it all. At the end he was completely blinded and mesmerized by the amount of money he was earning and he became a very hard and greedy person."

You are also envied as being one of the very few artists who managed to record simultaneously at Studio 1 and Treasure Isle. What would you say were the main differences between those two?
Alton Ellis: "The difference between the two studios mainly lay in the difference between the two producers. Duke (Reid, red.) was more stable as a producer. If he would record only five songs in a day, all of those would turn out to be guaranteed hits, whilst Coxsone would do maybe 15 tunes in one day, but only a couple would be hits. Duke's studio also had a special kind of sound because it was made of wood. That created a type of acoustics Studio 1 did not have. What Studio 1 had was the sound of some great musicians who really managed to overshadow Treasure Isle."

We can't really say "Alton Ellis" without saying 'Mr. Rocksteady'. The rocksteady period in Jamaican musical history was very short-lived. What really sets rocksteady apart from reggae? Some people even say that there is little difference; that it was just the first period of reggae before the Rastafarian lyrics put their mark on the music.
Alton Ellis: "There are differences. First and foremost the bass line is different. Nowadays the bass in reggae has a kind of pumping sound to it. The focus lies on giving the song energy. The bass line in rocksteady was much more melodious. Another difference is that in that time we used to put more variety in our songs. We would change the rhythm in a song and back again just to make it more interesting. Today's music is much simpler. The musicians today lack the ability to be versatile, so they stick to simple rhythms."

There's also a story about the birth of rocksteady involving Jackie Mittoo and an absent bass player. How much truth is in that story? (As the story goes, the first rocksteady song was created when one day, at a recording session at Studio 1, a bass player didn't turn up and Jackie Mittoo, who normally played the keyboards, decided to play the bass himself. He had great difficulty following the fast ska tempo so they all decided to slow it down a bit and the rocksteady beat was born, red.)
Alton Ellis: "I don't really recall that story. As far as I am concerned rocksteady just developed gradually and I spearheaded that sound without a doubt! I was off the scene for a while during the ska period and when I returned and joined the Treasure Isle studio, I came there with a different mood. The musicians picked up on that and we kept on going in that direction. The music became slower which gave the bass player the time to play more notes. In 1965 I named it rocksteady. The first rocksteady song was 'Girl I've Got A Date'. That one was still a bit up-tempo, leaning towards ska. Coxsone has always admitted that it was this song that turned the tide and made Treasure Isle the number one studio instead of Studio 1."

'Get Ready Rocksteady' is said to be the first song to actually feature the word "rocksteady".
Alton Ellis: "Yeah, that was the first one that actually used the term. I really shifted things there. Before I did hits like 'Get Ready Rocksteady', 'Cry Tough' or 'Dance Crasher', people who had a tune used to go to Studio 1 first and when rejected they came to Treasure Isle, but from that time they started coming directly to Treasure Isle. After me Treasure Isle produced people like The Paragons, The Melodians and U Roy; so a whole host of big names and sounds were born there under my influence. In 1967 Coxsone came down, offered me a contract and flew me out of the country to London. I still say that was because my influence was becoming too great. I was the strongest artist from that era. Ken Boothe used to be my backing vocal you know."

In your career you also did a great number of cover versions. What do you look for in a song before you decide to cover it?
Alton Ellis: "The mood and the way it makes you feel. Coxsone used to propose songs to us; he suggested 'Can I Change My Mind' for example. Others I just picked up listening to music. Just last week I found two versions of 'And I Love Her', the Beatles song, that I did back in the days. I really love that song. However I have to add that I always brought some changes to the original songs."

Being a "lover man" yourself, don't you miss that softer loving side of the music in today's reggae? It all seems so in your face and angry.
Alton Ellis: "I miss that a lot, but I'm forced to accept the changes that happen. I do admire the cultural side of the music, telling people about things that are going on and so on. There is more going on than love. I don't like them copying the American style and going on about "bling" and guns and other foolishness. Sometimes it results in pure aggressiveness and they really go over the top."

To end this interview, might you have a message for your Belgian fans?
Alton Ellis: "My message is very simple and universal, not very intellectual but humane: "Just love each other and live!""