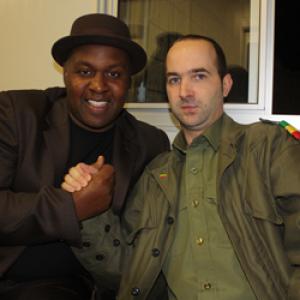 Alpheus, you're not really one of these artists who already knew they wanted to be on stage from when they were still a kid.
Alpheus: "No, I had no intention to become a singer whatsoever really; it was nothing more than a very fortunate accident, you might say. I guess I was just at the right place at the right time."

You're going to have to do slightly better than that, because how does a guy who doesn't really have any ambitions to become a singer end up recording his debut album at Studio 1, of all places?
Alpheus: "(laughs) Well, at the time I was in Florida, taking a break after experiencing a very hard time whilst living in New York (Alpheus lost his 18 months old son, red.) and I was just hanging out with one of my friends who operates a soundsystem down there. One day we were hanging out in the studio, recording some jingles and Tony Brevett, of Melodians fame, passed by and told me he liked what he was hearing. He told me that when I returned to New York he would introduce me to Mr. Dodd, but at that moment I didn't really pick up on the fact he was talking about Coxsone, so when I went to meet him I saw this elder gentleman sitting there and when Tony told me that this was the legendary Coxsone Dodd of Studio 1, I was nailed to the ground. Everything really started from that short meeting in New York."

Over the years, the opinions on Mr. Dodd have been very diverse, to say the least. What's your take on the man?
Alpheus: "I worked with him for about two years and that whole time was one fantastic experience to me. We spent nearly every day together during that period and over time we built a very solid relationship. I found him to be a wise man, and to me, he was more like a mentor and father figure. He's always been very honest and fair with me. I can only say that I still miss him to this day, because he really treated me as if I was his own son."

Your second album, 'Everything For A Reason', was a whole different affair, because you ended up in France working with Bost & Bim for the Special Delivery label.
Alpheus: "There was an intern working at Studio 1 who knew Pierre (Bost, red.) and JP (Greve, red.) from Special Delivery Records."

All the lyrics for your songs are reportedly taken from real life experiences.
Alpheus: "Yeah absolutely, I don't make stuff up and maybe that's why it takes so long for me to write a song? All my lyrics are based on real experiences and just like everyone else I go through good as well as bad stuff."

Your most recent album to date, 'From Creation', an album with a ska and rocksteady feel, you recorded in Spain at Roberto Sanchez' Lone Ark studio.
Alpheus: "Working with Roberto has been one of the greatest experiences of my life. I could hardly believe the quality this man knows to reach; to me he is a true genius. Everything really came together for this album."

The fact 'From Creation' is full of ska and reggae supposedly has to do with your disillusion with reggae music.
Alpheus: "It's not so much a disillusion with reggae music in general as it is with the whole almost factory-produced one drop riddim phenomenon. I tried it and I just felt it wasn't really me; I felt much more drawn to the original sound of the ska, rocksteady and even early reggae era. Don't worry; I'll still do reggae, just not these one drop riddim kind of things."

You were born in London, what kind of music did you grow up on?
Alpheus: "My mom and dad listened to a lot of ska and rocksteady, so I guess I should cite that as my first influences; people like John Holt, Marcia Griffiths, Alton Ellis were always singing somewhere in the background. As I grew up I got more into soul and funk, listening to groups like Earth, Wind & Fire and Kool & The Gang. I've never been into the whole UK dub scene though, although I might even perform with some of them now. (laughs) That's kind of funny, but it's like with certain foods; there are things you might have disliked for most of your life but as you get older, all of a sudden you develop a taste for them anyway. A lot of that UK dub stuff is pretty good, but at the same time I feel pretty comfortable where I am, so I think I'll stick with ska and rocksteady for the foreseeable future."

One thing you definitely don't seem to be doing in the UK is recording.
Alpheus: "The music I do isn't really being produced in the UK anymore. If you talk about a place like Studio 1, their sound is so unique, you can't just copy that in a studio in London, the same with Roberto Sanchez; he just has a very unique way of working."

Back in the day the big adversary of Studio 1 was Treasure Isle. You haven't been tempted yet to some tracks on their riddims?
Alpheus: "I absolutely love the Treasure Isle stuff and if the chance presents itself I would grab it with both hands."

Could you tell us how you came to use Alpheus as your stage name?
Alpheus: "Alpheus was my father's name. I was always very close to him and when I started my singing career I decided to use his name to honor him."

August 6, 2012 marks the 50th anniversary of the independence of Jamaica. What does that anniversary mean to a second generation Jamaican immigrant from London?
Alpheus: "My father came to the United Kingdom from Jamaica in 1944 to serve in the British Army. He was among the first Jamaicans to arrive in Britain, so that anniversary means a great, great deal to me. It's a great feeling to know that is the road my family travelled."