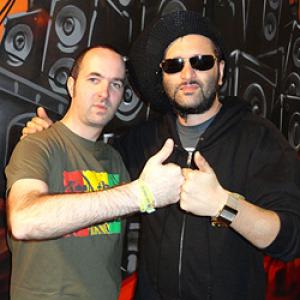 Alborosie, your brand new album '2 Times Revolution' has just been released...
Alborosie: "Yeah man, a 360 degrees pure reggae album with lots of different influences going on. I even did a tune in Spanish this time, but it's still got that Alborosie vibe."

The song you're talking about there is 'La Revolucion'. Why did you decide to do that with a Spanish lyric?
Alborosie: "Well, when I just started out in Jamaica, I recorded a little known Spanish album called 'Adelante' (Sony BMG, 2002, red.). I've always loved Latin music; it's a beautiful language and I really wanted to do something like that again. I also really want to connect more with my fans in Latin America, so I might be exploring that more in the future."

Revolution and reggae have always been linked, but why do we need a double one? Why '2 Times Revolution'?
Alborosie: "Simply because it's stronger! It's like when you order a pizza, double cheese is always tastier. It also says that even should that first revolution fail, the second one will certainly succeed."

On the album cover you're posing with a guitar that looks like Peter Tosh's legendary M-16 guitar.
Alborosie: "(laughs) It's my tribute to that guitar. I built it myself, a little thing I've been doing on the side whenever I have some time to spare."

Is that something you just see as a little side hobby or is there a business side to it as well?
Alborosie: "Business? I don't see things as business; to me it's about doing what you love. I love creating those guitars, but I don't sell them."

There's also a track on the album called 'Jesus He's Coming'. Is there a born-again Christian in Alborosie?
Alborosie: "Haile Selassie I once stated: "If you don't believe in Christ, don't even look at me!" ("A rudderless ship is at the mercy of the waves and the wind, drifts wherever they take it and if there arises a whirlwind it is smashed against the rocks and become as if it has never existed. It is our firm belief that a soul without Christ is bound to meet with no better fate.", Haile Selassie I, World Congress on Evangelism, 1966, red.), nuff said!"

You also released two albums on your own Shengen label not too long ago, 'Dub Clash' being an excellent dub album with versions of some of your songs and 'Rebirth' a new album by The Tamlins. How did that last one come about?
Alborosie: "The Tamlins, that's foundation music you know. It was something I always wanted to do and since in Jamaica everybody knows everybody I could finally make it a reality. We might be rereleasing it through VP Records by the way, to give it a better distribution and get some more exposure for The Tamlins, cause they definitely deserve it."

You did a number of studio albums now, but time and time again you've also proven you're a strong stage artist. No plans for a live album, yet?
Alborosie: "To be honest, I've got mixed feelings about doing a live album. I'm very passionate on stage, so maybe I'd rather prefer doing a live DVD so you can see the performance and feel the energy."

One of the strongest tracks on the album is 'Who You Think You Are', a bit of a slap in the face of all the diva's, male and female, in the music business.
Alborosie: "Well, my goal has never been to be able to sit down with people like Beyoncé at one or the other award show. I'd rather sit down next to someone like Che Guevarra instead! That's why the song goes: "Who you think you are? I'm just a revolutionary, fighting my own war!" I'm not in this to play the star; I want to stay close to the people and keep on fighting for equal rights and justice. Someone has to do it and that might as well be me! Blessed love!"