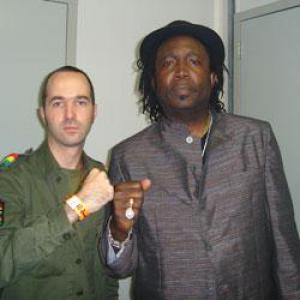 Al, nice to have you back in Belgium. I seem to remember you playing the Reggae Geel festival a couple of years ago, right?
Al Campbell: "Yes, with Freddie McGregor, Barrington Levy and Sugar Minott. That was a good show. That night we played with a full live band, tonight we did it inna original dancehall style."

Doing it sound system style, singing over a record, does that restrict you a lot as a singer?
Al Campbell: "No not really, you know. I just fit in any which way I can."

You recorded your first tune ('Freedom, Justice And Equality', red.) for Duke Reid, but then quickly moved on to Coxsone's Studio 1. Was that a conscious choice you made back then?
Al Campbell: "It was a conscious choice man! I won't go into the whole Duke Reid thing again because him gone now."

How do you remember the famous or should I say infamous Coxsone Dodd?
Al Campbell: "I remember Mr. Dodd as a nice man to tell you the truth! I'm not going to give the man a bad name. A lot of people have their arguments against him, but they have to remember one thing and that is that the man spent a lot of money on brining out records. I used to have some bad feelings about some producers too until one day I talked to Lee 'Scratch' Perry, who asked me about my collaborations with Phill Pratt. I answered him vexed: "Me no want to see that man deh for him no pay me no money!" Scratch calmed me down and told me: "No Al, the man spent a lot of his hard-earned cash to record you!" We have to remember those men!"

In the eighties you earned your place as one of the finest voices in lovers rock. That style never really hit it off here in Europe, but it was huge in the United Kingdom. What's the situation there now, because the UK reggae scene seems to be struggling a bit?
Al Campbell: "Well, I'm not struggling, but there's too much pirates deh bout, so records are not selling the way they're supposed to. You spend your hard-earned cash recording an album and these pirates go on the internet and don't pay no money at all! That sets you back as an artist."

What's your message for those youths who are downloading music illegally?
Al Campbell: "They should stop doing what they are doing and start supporting the business again. The artists are not making any money anymore and a lot of them are going to give up soon."

Your last album, 'Tribute To Clement Coxsone Dodd' was released just a couple of months ago...
Al Campbell: "That is not my last one, there's a new one just out called '24-7', distributed by Jet Star."

For that tribute album, did you have free range from the huge Studio 1 catalogue?
Al Campbell: "Yeah, I just picked out the best songs and the ones I liked most."

To end the interview I would like to give you some names and you can respond by explaining what they mean to you. Let's start off with: music?
Al Campbell: "Music is my life; that's what I live for. Music is my work, my life and my wife: everything! (laughs)"

Nuff of your tunes have a truly conscious message, so how much would you say you were influenced by Rastafari?
Al Campbell: "I man born a Rasta! I was already growing my locks when not a lot of people were walking around like that, from way back in the seventies. Rasta got too much fight inna dem days, so I took to the other side of the road for a while. The youths don't remember those things, but we're the originals!"

As a last one then: Jamaica?
Al Campbell: "Jamaica is my home. I love that place more than any other place in the world!"