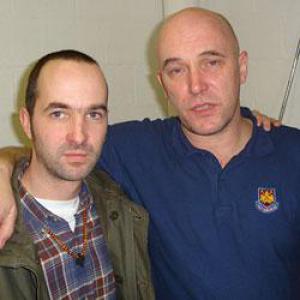 Saying Adrian Sherwood is saying On-U Sound in the same breath. If I read your biography correctly though, you worked for a couple of smaller labels before that.
Adrian Sherwood: "I started at the age of seventeen, when I became the junior partner of a label called Carib Gems. In that same period I met Prince Far I. I also had another company called J&A which ran into a bit of trouble, but we were one of the first reggae distributors in the United Kingdom. We used to import from Cash & Carry in Jamaica. That all finished and at nineteen years old I found myself in debt. I then started another company called Hitrun. For Carib Gems I used to select the songs we wanted to release. We released the first Black Uhuru, Trinity, Dillinger, The Twinkle Brothers, Prince Far I. There was some great stuff there, mainly roots. After I started Hitrun, Prince Far I gave me 'African Land' to release, a 12inch by Carol Kalphat & Clint Eastwood and we did 'Cry Tuff Dub Encounter Chapter 1', where he did all the riddims and I put all the noises on top. The first release on the label was actually 'Dub From Creation' (Creation Rebel, red.). After that I started yet another label called 4D Rhythms which only released one album namely 'Starship Africa' by Creation Rebel and then eventually we started On-U Sound."

What was your vision for that label? What did you want to accomplish with it? It was never just reggae & dub, but always just that bit more.
Adrian Sherwood: "Well to be honest with you, I just wanted to survive. Reggae was always my main love, but in that period I also met people like The Slits (all female UK reggae punk band, red.), The Clash, The Sex Pistols. Those were the kind of people that used to come to our gigs. I met Keith Levene (early member of The Clash, but mostly known for his work in Public Image Limited, red.), Jah Wobble, Ari Up (born Arianna Forster, lead singer with The Slits, red.) and Mark Stewart (founding member of The Pop Group and later part of New Age Steppers, red.) and did some tours with some of them as well. They asked me to mix them while they were playing live on stage. Tonight is actually the first night I did that again in about ten years. I'm not actually touring with Dub Syndicate we just met up here in Brussels. I didn't have all the equipment I wanted, but I was really enjoying myself, because it was that what I used to do originally for Prince Far I."

Were did a white English geezer like yourself learn the skills to do that?
Adrian Sherwood: "It's not really a matter of learning. I was very lucky in the sense that working with Prince Far I made me look good at what I did. The same here tonight; working with Style Scott (drummer and founder of Dub Syndicate, red.) makes me look good. I basically had the confidence to do it and tried to create my own sound copying from my own heroes and friends. The white thing is fair enough, I am white and that makes me very honoured that I got accepted by all these people, but at the end of the day you simply have to be good at what you do. I generally have a good relationship with the musicians I work with because they know my aim is to produce something good."

Now where is On-U Sound at today? At the end of the nineties the label disappeared, but now I saw you've got a new website online.
Adrian Sherwood: "On-U Sound still exists, it's registered, but I'm not running it as a record company anymore. It's a label rather than a record company now. I've done a deal with Emi, and they're now re-releasing a number of records from the back catalogue and on Real World I've released my new album 'Becoming A Cliché' and Little Axe will be on that label as well. I just produced a new album called 'The Modern Sounds Of Harry Beckett' (Harry Beckett, Emi/Virgin, red.), which is a jazz dancehall album. Harry Beckett is an 83-year-old trumpet player. And finally there's a new African Headcharge album coming, the first in nearly thirteen years, called 'Visions Of A Psychedelic Africa'. I don't really give a fuck trying to compete anymore. I do what I do and I've proud of what I've done in the past."

As a producer how do you feel about music becoming more and more of a disposable consumption article? When you started out, people were still going to record stores to buy the latest vinyl releases with their hard earned cash, but nowadays youths are just downloading songs illegally and worse deleting them again the next day.
Adrian Sherwood: "Times have changed. My son is fifteen and he has never bought a record in his life but he knows all the roots tunes. He gets all these tunes straight from Jamaica. That's how it is now. Personally I'm doing concerts, touring all around the world, just to survive basically. I'm working with non reggae related bands like Primal Scream and Asian Dub Foundation. I'm enjoying myself work-wise, but that being said, you can't rely on putting out records anymore to make a living."

Why did it take until 2003 for your first solo album to be released?
Adrian Sherwood: "Basically the changing times dictated that. What I'm concerned the Dub Syndicate albums were mine as much as Scott's. Every On-U Sound record was partly me really, so I didn't really care about a solo album. I was happier being on the back of a sleeve rather than on the front, but at a certain point I was doing more and more live gigs, travelling around the world with Ghetto Priest or Pete Lockett (world-renowned percussionist, red.). Doing this I get to promote the records I produced in the past and make a living at the same time."

What was the title of your debut 'Never Trust A Hippy' all about?
Adrian Sherwood: "If you look at things, the whole world today is run by fucking ex-hippies from the sixties. People like Richard Branson and Tony Blair, who really sold themselves out. It was actually a quote by John Lydon (aka. Johnny Rotten, lead singer with The Sex Pistols and Public Image Limited, red.)."

And what about 'Becoming A Cliché' then?
Adrian Sherwood: "That came from a conversation I had with Mark Stewart. You do become a bit of a cliché after a while of doing something. That's a fact for most people. By working with young producers like Jazzwad, I wanted to illustrate that I wanted to keep things fresh and modern rather than getting trapped in nostalgia. Reggae can get that sometimes."

To end the interview, I would like to give you some names from the On-U Sound archives and you can just respond by telling us what they mean to you. Let's start with: John Lydon/Johnny Rotten?
Adrian Sherwood: "Not a lot really. I liked his attitude and I like Public Image Limited. The ideas, hopes and dreams of that period were better than the actual reality of what happened."

Lee Perry?
Adrian Sherwood: "I think he is one of the most important people of the late twentieth century musically speaking."

Jah Wobble?
Adrian Sherwood: "He worked very very hard to improve himself. I respect him. He pushed himself to learn arts, literature and world music and eventually became a very good artist."

As a last one then, a beautiful voice that sadly passed away: Bim Sherman?
Adrian Sherwood: "I was Bim Sherman's number one fan. I first heard his voice when I was working in Palmer's Record Store in Harlesden (label and record store founded by Harry, Jeff and Carl Palmer. Palmer's, also known as PAMA Records later grew into Jet Star, red.). It sounded like something I had never heard before. I'm honoured to have worked with him and to have been able to call him my friend and I still think that 'Miracle' is the best album I was ever involved in."