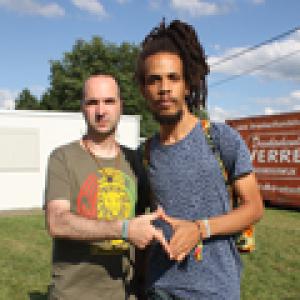 Addis, first and foremost welcome to Belgium, but I don't believe you're a complete stranger to this country, are you?
Addis Pablo: "No, that's right; I already collaborated with Pura Vida over here. We connected through the internet and did a few recordings together at Gebre Selassie's Dub Club studios in Kingston. Asher Selector from Switzerland was also present and the vibe was very nice. It's always good to be able to connect with people from different parts of the world and the internet has made that much easier."

You're the son of the great king of the melodica Augustus Pablo. Was it a difficult decision for you also to pick up that instrument and tread in your father's footsteps?
Addis Pablo: "To be honest, it wasn't the easiest decision, no. My father's name has almost become synonymous with that instrument and his influence on dub, reggae and Jamaican music history in general is huge. Following in his footsteps created a lot of expectations with people. In the end it was just a matter of me proving my worth as a musician. I wouldn't say I'm there yet, but I'm well on my way."

Did you grow up with the idea of becoming a musician or did that urge come later on in your life?
Addis Pablo: "Music was so much a part of growing up, that I never really knew otherwise. My dad had his own home studio and I grew up messing around with his keyboards. As time progressed, I became more and more interested in music."

How do you remember your father both as a dad and as a musician?
Addis Pablo: "He was a very great man; a spiritual, kind, loving and humble person. He was also very encouraging to others. Even though he accomplished a lot of things during the course of his life, he would never boast about them. If you were around him you'd never guess the things he'd already done. As a father he was the best dad I could have wished for and to me it's still as if his spirit keeps watching over me."

If I know anything about your dad, I would guess you were raised a Rastafarian?
Addis Pablo: "My dad instilled Rastafari in I&I from even before I was born. He focused a lot on the kindness and unity of Rastafari. For us it was always a lifestyle; something you woke up with and went to bed with and that covered all aspects of life from the things you eat and drink over the clothes you wear to the way you treat other people, and of course also how you approach music. My father wasn't a forceful person, so he tried to instill his values by reasoning about them and explaining a lot."

One of the greatest tracks of yours I came across this year was the Rory Stone Love produced 'Call Of The Righteous', a melodica dub cut to Jah9's 'New Name'. How did that tune come about?
Addis Pablo: "I connected with Rory a little more than two years ago and that riddim was one of the first recordings we did together. Rory came up with the riddim which immediately sounded very inspiring to me. He made me listen to Jah9's 'New Name', and from there it was just a natural flow of melodies coming together. Initially we were planning to release an EP, but as we kept on recording more and more tunes together it felt only right to steer the project towards a full album. Among other things we did a reworking of 'Casava Piece' featuring Chevaughn (Clayton, red.) from C-Sharp."

'Casava Piece' is of course one of your father's melodies. Do you often play his music?
Addis Pablo: "When I perform live I usually include a few of his tracks in the set list, yes, tracks like 'Java', 'East Of The River Nile' or 'Casava Piece', that most people know, to pay tribute to his legacy. His songs are the foundation of what I'm doing today and I guess people wouldn’t be listening to my music if he hadn't done his works."

Your father had a very special relationship with Japan. His style wasn't called "Far East" for nothing.
Addis Pablo: "I've definitely been influenced by Japanese culture and the relationship that people has built up with reggae music is amazing. If you look at the recording of the Japansplash reggae festival in 1986 and see how the crowd responded to my father's music, it was as if he was among his own people. The Japanese people definitely had a strong connection to his sound and that so-called Far East style is still present in my music as well."

What can you tell us about the Suns Of Dub project you're also involved in?
Addis Pablo: "Sons Of Dub is basically a platform for dub and alternative forms of reggae like dubstep or hip-hop influenced reggae. We do both sound system shows and production work and it's also the label I publish a lot of my work under."

Apart from your father's, what kind of music did you grow up on? What kind of music do you like?
Addis Pablo: "Apart from reggae I'm a big fan of jazz, people like John Coltrane or Billy Holiday, but you can just as easily catch me listening to Public Enemy or The Rolling Stones. I have a very broad musical taste. I just love the feeling music can give me and that I can give to people with my music; music is all about sharing emotions and feelings."