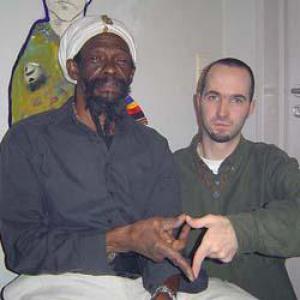 Donald, Abyssinians is regarded as one of the main examples of the vocal trio in roots reggae. Where did this tradition of trios stem from? Why not just as well form a duo for example?
Donald Manning: "The harmonies sound very nice when you sing with three persons. Vocally you can get more out of the music then when you are singing solo or in duo."

Abyssinians count as being the foundation of Jamaican roots bands, but even the foundation has to have its roots grounded somewhere. What were your influences?
Donald Manning: "Amharic, the Ethiopian language. "dehna" means "good", "igzhiabear" means "god", "yi-mas-gan" is "let him be praised" and "ulagize" is "continually". We sing these things in our songs because the culture helps us along. We also read the bible to get to that higher level."

Do you speak the language fluently?
Donald Manning: "No, I'm still learning."

Have you ever been to Ethiopia?
Donald Manning: "No I haven't been there, but I have literature from Ethiopia, so we learn and that's good. There's even a more ancient language there called Ge'ez."

How does it make you feel when like tonight you can clearly see that you are still touching and influencing whole new generations with those same songs?
Donald Manning: "Well, it only shows us that the music can't die because every song is a sign and has a message. We are putting out the right message and the people are listening to what we are saying. If you put the wrong message out there you're going to get the wrong answer and vice versa."

We can't forget talking about 'Satta Massagana', closing track in the concert tonight. That song has been so influential to reggae and Rastafari that it is justly called an anthem. How did that song come to be? What's its story?
Donald Manning: "We just came together and I was playing guitar. We started singing and that's it. We naturally put those words on paper so we wouldn't forget!"

To end the interview, I would like to give you some names and you can just tell us what they mean to you. As we are after all celebrating his 60th birthday here tonight, let's start with: Bob Marley?
Donald Manning: "Bob Marley was a strong reggae singer. He carried reggae all over the world. The influence he had and the people who supported him made that possible. Bob Marley did his work and it was spiritual. We have to give thanks for what he did."

Africa?
Donald Manning: "Ethiopia! Ethiopian civilization came down the river Nile. We've got to teach each other because a lot of things came out of Africa. Even right now people still go to Africa to get things. They say it's because the people in Africa can't help themselves, but they should teach the people to help themselves! If you just take the wealth out of the country, you are not helping the people of Africa. My thoughts are in Africa and I'm going there to live! Now it is 1997 in Ethiopia and 2005 in the western world. In the West they say those people are "behind", but really it's just the time in the West that's running out faster! A lot of things are going on, war and rumours of war. Look for the mark of the beast!"

Nuff wisdom! Thanks for sharing that with us. I want to end with: His Imperial Majesty?
Donald Manning: "His Imperial Majesty is Yassus Christos in this time. The bible says so in Revelations chapter 17: "They shall make war with the lamb and he shall overcome them, for he is king of kings, lord of lords, conquering lion of the tribe of Judah.". So we have to go with the Bible and interpret what was put there. So give thanks to his Imperial Majesty. He gave us Amharic. Before the scriptures were only in Ge'ez, His Majesty made them available in Amharic to make the people understand more. He founded schools and universities to and sent the people of Ethiopia over to Europe and America to get educated and with their education help build the country. When he came to Jamaica he said we and the African people are blood brothers. So give thanks for His Imperial Majesty!"

Rastafari, Selassie I ever living!
Donald Manning: "Selassie I, power of the trinity, bless!"