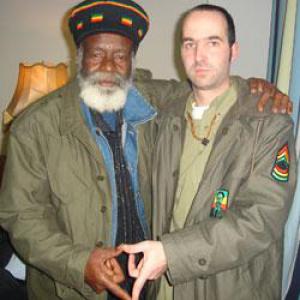 Blesings Donald, blessings Bernard, it's a true honor to have you here in Belgium again!
Donald Manning: "Yes, give thanks and praise! All the best to the Belgian people because they always give us a great turnout whenever we pass by! They truly appreciate us, so I have to give thanks and praise and I ask Jah to bless everyone here."
Bernard Collins: "I'm really overwealmed to be here again. I've been in Belgium many times, but it's really the first time we got such a warm reception."

The Heartbeat label once again re-released your legendary 'Satta Massagana' album just recently. 'Satta Massagana', the song, has been called a Rastafari anthem all too often. Do you agree?
Donald Manning: "Yeah, because it was the first song in Jamaica with Amharic lyrics. The song was self-explanatory. "Satta Massagana" means "Give thanks", but it's not the right way to thank Jah in Amharic. You should really say: "Tenastelin, dina Ighziahbehir Yimmasgan.", so we corrected that in the song 'Y Mas Gan'."

Amharic is one of the typical aspects of the music of Abyssinians. How did you get in contact with that language?
Donald Manning: "Well, Mortimer Planner (Mortimo 'Kumi' Planno, September 6, 1929, Cuba - March 6, 2006,  was a renowned drummer and Rastafari elder and considered one of the ideological founders of the back-to-Africa movement. He is best known as the Rasta teacher of Bob Marley, and as the man who commanded the respect of a chaotic crowd during the arrival of Emperor Haile Selassie on his visit to Jamaica in 1966, red.) used to teach it in his house down in Trenchtown. The police raided the place plenty of times and we had to run often, but still we didn't care because we really wanted to learn the language. Dr. Ephraim Isaac (Dr. Ephraim Isaac pioneered the first organized campaign to eradicate illiteracy in Ethiopia that impacted over 2.5 million Ethiopians over two decades, he is an advocate of civil rights, a respected mentor to the Ethiopian youth in Diaspora, and a man of character who has endeared himself to his fellow Ethiopians. Dr. Ephraim Isaac received his Ph.D. from Harvard University in 1969 in Near East languages and Civilization, a B.A. degree in Philosophy, Chemistry and Music from Concordia College, and a degree in Divinity from Harvard Divinity School in 1958 and 1963 respectively. He speaks over seventeen languages and is an author of numerous books and articles. His most recent publications include "The Book Of Enoch", "An Ethiopian History Of Joseph", "A History Of Religion In Africa" and "A Cultural History Of Ethiopian Jews", red.), an Ethiopian professor, visited Mortimer Planner and left a number of books and tapes. It's from those tapes we started to pick up some notions of the language. After we had to run from Planner's place for the umpteenth time we started to have the lessons at my yard. If Professor Ephraim Isaac hadn't visited Jamaica, we wouldn't have had the knowledge we have today, so we have to respect him."

The story goes that when you took 'Satta Massagana' to Studio 1, Coxsone didn't like the song too much because he found the music too slow.
Donald Manning: "Well, we never recorded the song for Coxsone; it was Bernard Collins who financed the recording. My brother Carlton, from Carlton & The Shoes, was a guitar player at Studio 1 at that time and he got the other musicians together to record that session. After the song was recorded, we contemplated about what to call it. I wanted to call it 'Satta Massagana', but Bernard insisted on 'Far Far Away'. That was in 1969. In 1971 we rerecorded it with some Nyahbinghi percussion added - with Bongo Herman on the repeater and myself on the bass drum - and that version was released as 'Satta Massagana'."

When you recorded 'Satta Massagana', Leroy Sibbles apparantly played a key role in the musical process.
Bernard Collins: "Yes, at that time he was the main man at Studio 1 who orchestrated most of the sessions if and when Jackie Mittoo wasn't around. At the time when we recorded 'Satta Massagana', Jackie Mittoo was residing in Canada, so Leroy orchestrated the whole arrangments with his Sound Dimension band (Originally known as The Soul Vendors, they were the Studio One house band, bunkering down in the famed studio and working full time for over two years to record the instrumental tracks for the label's roster of stars. Often delivering twelve songs during one day of recording, the group contributed their licks and grooves to over 4000 tunes for the likes of John Holt, Dennis Brown, Horace Andy, The Heptones, Marcia Griffiths and Freddie McGregor, red.). We composed the riddim, but we just went to Studio 1 playing our guitars.

A couple of years ago all the top Jamaican artists payed tribute to the legacy of 'Satta Massagana' on 'Tree Of Satta', a one riddim album produced by the Blood & Fire label. How did that project come together?
Bernard Collins: "Well, that project was actually started by myself. I got the inspiration from seeing so many compilation album of the Satta Massagana riddim on the streets. I guess there were about three albums out there, so I decided to re-release the original riddim track and got together with some Jamaican artists to record a version. Blood & Fire was reputable company that usually dealt with rereleasing original roots material, but this was the first time they released a one riddim album and the first time they dealt with artists like Capleton or Anthony B, so it's a significant album."

What's your favorite track on the compilation?
Bernard Collins: "My favorite was Yami Bolo's 'Conspiracy'; he's got a bit of a Uhuru sound going there (Bernard refers here to the so-called "Waterhouse Wail", a singing style that originated in Kingston's Waterhouse district in the early seventies, singers like Michael Rose, Junior Reid and Don Carlos made it famous, red.), but Yami always sounded a bit like Michael Rose. (laughs) I always enjoy his songs and he's a gentle and cool guy too."

If you look at the output of Abyssinians over the years, it's certainly not the largest of all Jamaican bands, but your music did have a profound impact. Where do you think the secret of Abysinnians music lies?
Bernard Collins: "Anyone who knows the history of Abyssinians, knows we didn't come from Studio 1 or Treasure Isle or Harry J, it were our own independent productions on the Clinch label that I financed together with the Manning brothers. We didn't have much promotion because we had to go to the different sound systems ourselves and ask them if they wanted to play our tunes. Gradually these songs grew and grew. 'Satta Massagana' took over three years to get a little popularity. That kind of a song we call a creeper in Jamaica,so Abyssinians music is creeping music and we were a creeping band! (laughs)"

Apparantly hearing 'Declaration Of Rights' inspired the late Bob Marley in writing 'Get Up Stand Up'.
Bernard Collins: "Bob was a very easy-going guy. I remember when I had just recorded ‘Declaration Of Rights' and took it down to Beeston street for him to sell it in his shop (In 1970 Bob Marley started the Tuff Gong label and store, located at 127 King Street, corner of Beeston Street, Kingston, red.). When he heard it, he started to jump and dance and told me I should always  keep calling on Jah in my songs, as you know we always do. 'Declaration Of Rights' was a very strong song. I visualised it in Trenchtown - back in the days when the place was still like a musical university with people like The Wailers, The Maytals and so on living there - recalling the days of slavery, being whipped and kicked, toiling on the sugar plantations. The song just suddenly appeared one night while I was strumming away on my guitar."

You're still hugely popular in Europe and the United States, but how's that back home in Jamaica? Do the Jamaican  youths still know Abyssinians?
Bernard Collins: "Yes, our music is still played very regularly, it's just that we don't perfom live as much anymore. Recently we did a set as part of the Heineken Star Tour, which is an oldies show, and we played the 2007 edition of Rebel Salute, Tony Rebel's festival. But as I say, we don't frequently play there anymore; for some reason we're more occupied overseas these days."

Because they use a different calendar (The Ethiopian calendar, also called the Ge'ez calendar, is the principal calendar used in Ethiopia. It is based on the older Alexandrian or Coptic calendar, which is based on the even older Egyptian calendar. The seven to eight year gap between the Ethiopian and Gregorian calendars - used in most western countries - results from alternate calculations in determining the date of the Annunciation of Jesus. Like the Coptic calendar, the Ethiopian/Ge'ez calendar has twelve months of 30 days each plus five or six epagomenal days - usually called a thirteenth month. The first day of the Ethiopian year, 1 Mäskäräm, for years between 1901 and 2099, is usually September 11 in the Gregorian calendar. The current year according to the Ethiopian calendar is 2000, red.), Ethiopia celebrated the millennium in September of 2007. Is this a special year for you as a Rastafarian to?
Donald Manning: "Yes, because I'm an Ethiopian Orthodox. I'm the only one in the group with knowledge of the Amharic language. I don't want to say anything I'm not supposed to, but I will say this: "The dead don't praise God, neither do they that go down in silence, so we have to give thanks for life right now!" When you step out the door, you never know what can happen, so you just have to give thanks for life whenever you can."

What do the colours red, gold and green represent to you?
Donald Manning: "You have to start by saying green, gold and red! When the red is on the top in Ethiopia, it means they are in a state of war. If the flag is the other way around it symbolises prosperity."

Thanks a lot for doing this Bernard.
Bernard Collins: "Thank you too. I'm so pleased and I say love to everyone inna Belgium. It was a pleasure to be here and I hope we will return very shortly!"