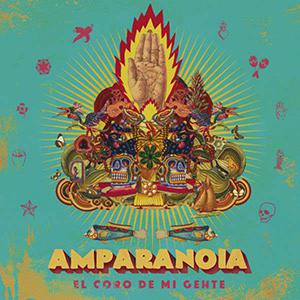 Just when we thought the Catalan musica mestiza scene was as good as dead, two stalwarts are breathing new life into the genre. First there was Che Sudaka, with the release of 'Almas Rebeldes' put its 15th anniversary in the spotlight, and with 'El Coro De Mi Gente' ("the choir of my people") Amparo Sanchez also returns to her roots. The past 10 years the Catalan singer focused on a solo career, but 'El Poder De Machin', Amparanoia's debut album was released exactly 20 years ago, so the singer reassembled her old band to revisit the album. Like Che Sudaka did for 'Almas Rebeldes', Amparo also invited a host of friends and colleagues (Macaco, Manu Chao, Aterciopelados, Sergent Garcia, La Pegatina, Calexico's Gaby Moreno, Fermin Muguruza, Ojos De Brujo's Marinah...) and asked them to revamp their favorite track from the album. The fact Amparanoia is now also touring Europe again, we have Gregory Porter to thank for.  The morning after a unique concert at the French Bout du Monde festival in August of this year, the American jazz vocalist walked over to congratulate Amparo, inspiring the singer to organize an entire tour to promote the release of 'El Coro De Mi Gente'. Our favorites from the track list are opener 'Hacer Dinero', given a delicious cumbia-vibe by La Troba Kung-Fú's Joan Garriga, the reggae of title track 'El Coro De Mi Gente' featuring Macaco and the infectious 'En La Noche' featuring Manu Chao. More than excellent reinterpretation of the original and proof that even twenty years on Amparanoia can still convince!