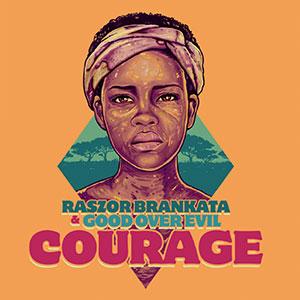 Thanks to Sista Livity & Sista Moni's 'Only Love' album, we already got a first taste of the production work of the Spanish Roquetes-based Good Over Evil (a municipality in the south of the Spanish province of Tarragona) a few months ago, and for 'Courage' they now joined forces with Raszor Brankata, a Swiss based Ghanaian.

Brankata was born Osman Kobbinah Mensah Hamid in the "twin port city" of Sekondi-Takoradi in southern Ghana. At the beginning of his musical career, in the 1990s, Brankata was still mainly passionate about genres like hiplife, hip-hop and r&b, was known as Ex Ray and a co-founder of hiplife band Burning Soulz.

In 2004 Brankata relocated to Switzerland, and after a trip to Jamaica in 2007, shifted his musical focus to reggae. In 2016 there was already the 'Stay Stronger' album, now followed by 'Courage'.

The album opens with the intimate nyahbinghi vibes of 'African Children', then Brankata immediately switches to a higher gear for the new roots of 'Warrior' and the similar 'Cry For My Destiny'. The slow-paced 'Oneness' couldn't really convince, but 'Heart' is a powerful UK steppers tune.

The track list of 'Courage' counts 9 new songs, followed by as many dubs and acoustic and instrumental versions, keeping you occupied for close to an hour and a quarter.

More than pleasant introduction to this clearly talented Ghanaian artist!