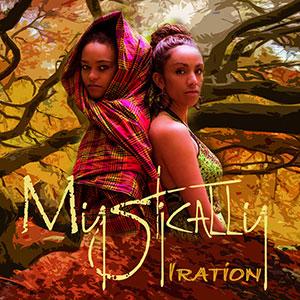 The story of Mystically starts in 2007, when three singers from two different bands found each other after a concert aboard the Guinguette Pirate, a Parisian concert boat disguised as a pirate ship.

Marie-Lou Fauconnet and Marie Fesquet-Berman, both of Congolese descent, are then still backing vocalists with Irie Team, and Adeline Aurokiom, who has Martinican roots, is a saxophonist and Backing vocalist with Unitone.

From the start, there's an unmistakable chemistry between the three and soon plans to form a vocal trio performing a repertoire made up of covers of soul, funk and reggae classics take shape. In 2008, the trio performs together for the first time on the occasion of a Bob Marley tribute at Le Cylindre, a concert hall in Besançon, a town just east of Dijon.

The following year, they start collaborating with backing band The Riddim Shot, and Marie-Lou, the benjamin of the trio, decides the time is right to start working on her own compositions. Between 2009 and 2013, she writes about a dozen songs and the trio is also often asked to provide backing vocals for artists and bands like hip-hop formation Green Shop, pop/rock artist Benny Joke (both also hailing from Besançon), and French reggae artists like Nuttea and Fayah P.

However, just as there's talk of a first full-length album, Adeline decides to quit the project in order to be able to devote more time to her family. In 2015, Marie follows suit, but refusing to let all the work she has done go to waste, Marie-Lou decides to finish Mystically's debut album on her own.

Fortunately, in 2016 she manages to persuade Adeline to join the project again, and in that same year, 'Ladie's Words' finally sees the light of day.

Four years on, there's now successor 'Iration', for which the duo once again collaborated with bassist and drummer Victor Pierrel and Tom Moretti (already present on 'Ladie's Words'), supplemented by John Sigwalt on guitar and Mathis Bouveret-Akengin on keyboards.

The track list consists of 8 new songs, immediately starting with two of the album's highlights: opener 'Africa' is a wonderful ode to the black continent, and is immediately followed by the up-tempo title track 'Iration', a true earworm if ever we heard one. In addition, 'One Song', lyrically somewhat similar to 'Africa', certainly deserves a mention.

If beautifully harmonizing female voices and soulful roots (occasionally interspersed with the rocksteady of 'You Stay') are your thing, with Mystically you won't go wrong!